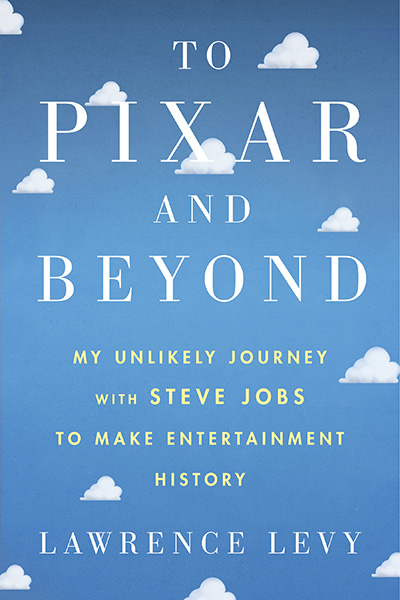 An AMAZON BEST BOOK OF 2016 in business and leadership

A FORTUNE MAGAZINE Favorite Book of 2016

“What a delightful book about the creation of Pixar from the inside. I learned more about Mr. Jobs, Pixar and business in Silicon Valley than I have in quite some time. And like a good Pixar film, it’ll put a smile on your face.”
– Andrew Ross Sorkin, New York Times

“I love this book! I think it is brilliant. Of course I am biased, but even so, I think people will love this story, one they didn’t even know existed. And Lawrence has told it beautifully.”
– Ed Catmull, Co-Founder and President Pixar Animation, President Disney Animation, author Creativity Inc.

“An epic tale of Levy’s quest to balance the competing interests of the quiet artists and technologists who created Toy Story and the mercurial entrepreneur who controlled their professional fates.”
– Fortune Magazine

“This is the gripping story of how through hard work, vision, and a devotion to excellence, tiny Pixar transformed itself into a Hollywood powerhouse. But it is also something more: a wonderful buddy story—between Levy and Steve Jobs—and how their friendship and partnership transformed them both.”
– William D. Cohan, bestselling author of House of Cards and Money and Power

To Pixar and Beyond is part business book and part thriller — a tale that’s every bit as compelling as the ones Pixar tells in its blockbuster movies. It’s also incredibly inspirational, a story about a team that took big risks and reaped the rewards. I loved this book and could not put it down.
– Dan Lyons, bestselling author of Disrupted

“Enchanting…Mr Levy has quite a story to tell.”
— Jonathan Knee, New York Times

“Hi, Lawrence?” the caller asked. “This is Steve Jobs. I saw your picture in a magazine a few years ago and thought we’d work together someday.”

After Steve Jobs was unceremoniously dismissed from Apple in the early 1990s and was struggling with NeXT, he turned his attention to a little‑known graphics company that he owned called Pixar. One day, out of the blue, Jobs called Lawrence Levy, a Harvard‑trained lawyer and executive to whom he had never spoken before, to persuade Levy to help him get Pixar off the ground.

What Levy found was a company on the verge of failure. To Pixar and Beyond is the extraordinary story of what happened next: how, working closely with Jobs, Levy produced and implemented a most unusual plan that transformed Pixar into one of Hollywood’s greatest success stories.

Set in the worlds of Silicon Valley and Hollywood, the book takes readers inside Pixar, Disney, law firms, and investment banks. It provides an up‑close, firsthand account of Pixar’s amazing ascent, how it made creative choices, Levy’s enduring collaboration and friendship with Jobs, and how Levy came to see in Pixar deeper lessons that can apply to numerous aspects of our lives.